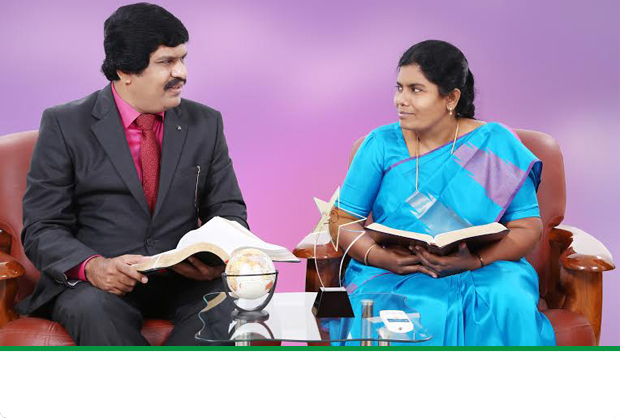 We welcome and greet you with a big GOD bless you, and pray your visit to our site would answer your doubts about GOD, and HIS blessings fulfill all your spiritual needs, satisfy you and quench all your spiritual thirst, and give you the assurance of meeting JESUS in Heaven.

With lots of hope in meeting you face to face in Heaven, In His wonderful Name,

"With men it is impossible, but with GOD all things are possible" says the Bible.

Born on 14th April in 1971 to the GOD fearing parents named Bro.Jayabalan and Mrs.Saroja Jayabalan in a Village T.Kallupatti in South India, Brother was brought up in a very pious Christian way. When he was just a month old baby he was offered in the hands of the world renowned missionary named JOHN PRINITIS who had come to that village from England, who prayed for the boy baby to become a mighty servant of GOD like him and to be on FIRE for JESUS. His parents named him Allen Paul after the names of the famous servant of GOD Allen and after Apostle Paul who stands as the best example to every servant of GOD. Even in his childhood days his parents found him to be unique and a very special child because he was very different from others as his only interest was in JESUS, and finding more about HIM.

"As it is written in the law of the LORD, Every male that openeth the womb shall be holy to the LORD" Luke 2:23

Thus he was dedicated for GOD’s work by his parents when he was just 13 years old. GOD was with him all through his life. During his childhood days itself GOD anointed him at the very young age of 12 while he was attending a youth meeting, and there he offered himself to GOD and pleaded JESUS to cleanse him with HIS precious Blood and make him pure and holy and also pleaded that the LORD should grant him salvation.

This little boy who was on fire for GOD, saw a vision on the spot where he saw  JESUS coming down with HIS twelve apostles and anointing him and sanctifying him. From that day onwards, Bro.Allen started seeking JESUS more and could not keep the joy of salvation within himself but started telling everyone about what he knew about JESUS and how good JESUS is!

Whenever he had some free time after his school hours the little boy Allen, started his mission of announcing everything he knew about JESUS, to each and everyone whom he met in all near by villages. And to his surprise few of his age group boys and friends too joined him in his mission. That is how the journey of the future-servant of GOD started at a very young age.

Psalm 128:2-4 "Blessings and prosperity will be yours. Your wife will be like a fruitful vine within your house;" Yes true to this promise, GOD blessed dear Bro. Allen with a fruitful vine as his life-partner Sis.Sophia Allen Paul. And true to the verse found in Psalm 128: 3, “Your sons will be like olive shoots," GOD had blessed dear Brother with three lovely children named Alice, Daris and Harris.

Born to a very pious couple named Mr.Devapriyam and Mrs.Prema Devapriyam, true to her name she was a girl who had the CHRIST like nature in her even from her very young age. She proved to be the fruit yielding tree as said in the Bible. GOD has blessed them with beautiful kids named Alice, Daris and Harris Yuvraev. She shoulders Bro Allen in the ministry by taking care of the monthly Magazine and also by delivering GOD’s word to the women and encourages and gathers all the women to the kingdom of GOD. All glory and honour be to GOD alone. As said in the Bible, now the whole family is on fire for JESUS.

Glory be unto the LORD Most High

SALVATION AND ANOINONTING : The LORD by HIS Grace, saved Bro. J. Allen Paul at the age of 12 and on the same day, the LORD filled him with HIS HOLY SPIRIT abundantly. Ever since, he had been habitually praying long hours, with a burden for souls. Besides, he joined a group of young boys and they had been praying regularly. As such, GOD opened his spiritual eyes , and he saw himself in a vision as if he was preaching to a great multitude.

STUDIES AND CAREER : After finishing his technical studies, he worked as a Video Engineer, for four years.

THE CALLING : It was at that time did he strongly feel the call of GOD for full time ministry. As a response, he quit his job and the JESUS LOVES Ministry was established as a small beginning. Ever since, he had been working day and night, praying for people and ministering to them , in every possible way, responding to every call, be it from a village or a city. His only burden was to see people filled with the knowledge of GOD.

THE TURNING POINT : Dec ’03 was a turning point. Since he had been working day and night neglecting his own health, he had to suffer a severe ache in his chest. It was as though, he was walking in the valley of darkness. But the HOLY SPIRIT comforted him saying, every promise given to him by GOD, will surely come to pass. The LORD promised that HE would take him to another platform in ministry, where the Word of the LORD would be taken to millions. As such, the LORD opened the doors for Television ministries.

The LORD continuously led him towards what HE had planned to fulfill through Bro. Allen Paul. He started having glorious encounters with GOD, and GOD started urging Bro. Allen to step into the television ministries.

The Aseervatham TV Tamil, brings the Word of GOD 24 hours a day. The mighty Hand of GOD upholds this ministry amidst various trials, constraints and the forces of the darkness. The works of the mighty Hands of GOD are manifested and we come to know about it through the letters, and phone calls we receive.

Radical changes are visible in the lives of many. Many people have committed their lives to GOD and have started leading a Holy life that pleases GOD, according to HIS Words.

Listed below are some of the Mighty Deeds of GOD through this ministry.

✓  Salvation of the Soul

✓  Learning to Pray and Praise

✓  Deliverance from the Devil.

ASHEERVAAD TV is a 24 hours Hindi Christian, Free to Air Channel, ordained and telecast by the Power of Almighty GOD to carry HIS Word exclusively for Hindi speaking Christians, to edify them spiritually. It airs round the clock, Messages, Songs, Skits,Conversations and Puppet shows, as to bring about Spiritual, Financial and Family Blessings upon the lives of its viewers.

This channel that runs untiringly, yet humbly, carrying the Word of GOD covers the Hindi speaking Christian Population all through India, and even the Middle East. The responses have been striking, similar to that for the Tamil Channel.

As per GOD’s leading, Brother Allen Paul and Sister Sophiya Allen Paul were on a Prayer Walk through India and when they were in Delhi, the LORD spoke mightily with Bro.Allen and Sister Sophiya, to start the Blessing Church Ministries all through India and a chief Church at Chennai to organize all Churches throughout India. Since such a thought hadn’t occurred to them earlier, Brother Allen and Sister Sophiya waited on the LORD several times with fasting to get confirmation. But the LORD was determined and moved mightily and thus the Chennai Blessing Church was established on 26-8-2012 and is functioning ever since. Following that, several churches have been planted in North India and Andhra Pradesh at places reached by Blessing Hindi TV. Inclding Virudhunagar, there are approximately 400 Blessing Churches all over India.Glory to God for His mighty deeds.

THE GOD WHO CALLED US HAS BEEN FAITHFUL :

In all the days of the ministry, we’ve been through various situations, tried in several ways, but the LORD has been faithful in providing us. HE has never left us nor has forsaken us. At any time, HE is sufficient for us. Besides comforting and providing, HE is working wondrously and mightily in our ministry as HE will ever do.